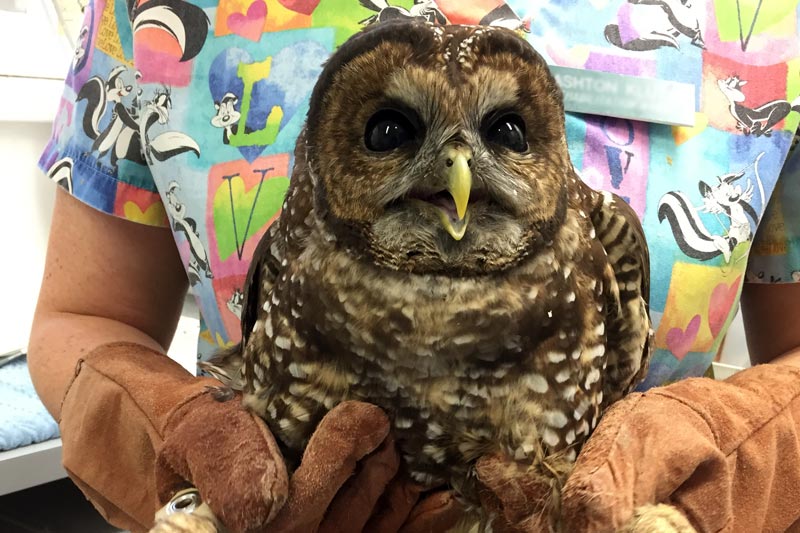 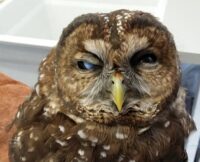 In mid-September The Bird Rescue Center admitted an injured Northern Spotted Owl, a species we rarely see. It was found in the middle of a road in West Sonoma County with what appeared to be some damage to its left eye, which remained partially closed. Beyond that and a small abrasion on its beak, the bird seemed in perfect health. Our staff treated the injured eye until we were unable to see a difference between left and right. We then took the owl to see Dr. Rebecca Burwell, our veterinary ophthalmologist, who identified minimal hemorrhaging, but otherwise perfect vision. 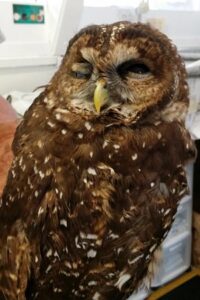 We also did some flight testing on a long tether to make sure everything else was in working order. Our Raptor Team declared this owl to be “the highest flyer yet!” which is really saying something! While waiting for the weather to cooperate and allowing more time for the eye to finish healing, it was determined that this bird was a “dispersing juvenile,” which simply means it’s still trying to find its own territory in which to hunt and breed. Since they are federally listed, we consulted with our Fish and Wildlife contacts as to the best possible location for release. The release went perfectly, with this rare and beautiful owl flying strongly off into the night. 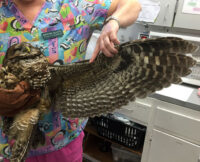 Northern Spotted Owls (Strix occidentalis caurina) are year-round residents of the North Bay area. Breeding populations need a very specific habitat — old-growth and mature second-growth evergreen forests, the decimation of which has caused this species’ population to plummet. While Spotted Owls are often associated with deep remote Douglas fir forests, they can sometimes visit and even nest in the vicinity of rural residences, meaning they are susceptible to cars and other human-caused impacts. Because they are listed as a threatened species under the Endangered Species Act, and much rarer than Great Horned Owls, we consider Spotted Owls very special indeed. For comparison, since 1980 BRC has admitted 521 Great Horned Owls but, until this past summer, only 8 Northern Spotted Owls.

Read more information on this species and tips on how you can help protect it.