Skip to content
‘Rebuilding’ a Peregrine Falcon, a feather at a time

‘Rebuilding’ a Peregrine Falcon, a feather at a time 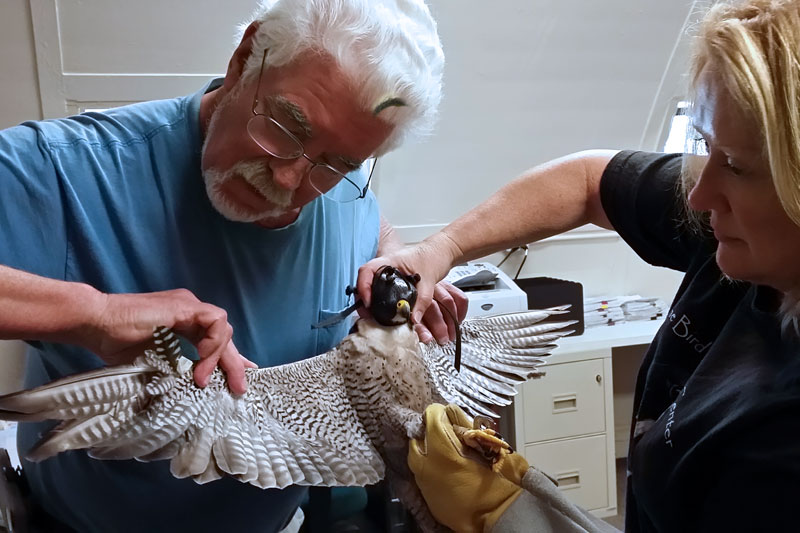 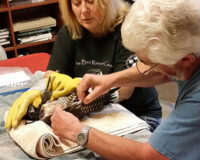 The Peregrine Falcon (Falco peregrinus) has made a miraculous recovery in North America from a near total collapse in the 1970s due to the pesticide DDT. Here’s a more recent story about an amazing comeback of one Peregrine, made possible through the expertise and devotion of our medical and rehabilitation teams. 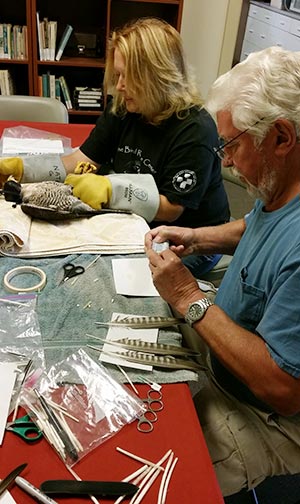 Peregrine falcons are the fastest animals on earth, diving at speeds of 200 mph or more to strike prey in flight. They depend on an intact set of feathers for optimal flight and diving capability. Birds of prey naturally replace their feathers each year a few at a time, in stages of molting and regrowth that allow them to keep hunting. When raptors severely damage several feathers at once, it can mean starvation and death.

On August 8, this Peregrine came to BRC with a broken right clavicle. After the initial treatment and rehabilitation was finished, it was clear that four of the falcon’s primary flight feathers on the right wing were broken to the point it would be unable to fly well. Fortunately, our raptor release experts Brad Marsh and Natalie Getsinger have developed the skills to “rebuild” a bird’s critical missing wing feathers.

Imping, as it is known, is a process our raptor team has perfected this season. Over time they gather feathers that have been molted out by other birds, or harvest them from birds that have passed away. These feathers are sorted by species, age and position on wings or tail. The donor feathers are tacked into their proper places, and the birds are test-flown to be sure their flight is perfect. The replacement feathers can then be fine-tuned and permanently glued in place before the birds are released.

Through the skill of our medical team, Dr. David Rupiper, our Avian Rehabilitation Director Ashton Kluttz and our rehab team, this Peregrine was skillfully imped, rehabbed and released in just one month.

Our rescue and rehabilitation teams invest thousands of hours each year to treat and return native birds back to the wild. BRC depends on your financial gifts in order to run our bird hospital and our rehabilitation program. Your generosity saves thousands of birds each year, like this falcon, by enabling BRC to rescue and care for our native wild birds in distress.