Skip to content
A daring rescue, a grateful return & BRC is back open

A daring rescue, a grateful return & BRC is back open

The past two weeks have been trying times, with so many people suffering tremendous losses as fires have devastated our region. We are grateful for the acts of kindness and generosity already taking place in our county, and will continue to watch with quiet pride as we rebuild what has been lost. We are forever indebted and inspired by the thousands of responders from throughout the state and nation that came here to stop the fires, maintain peace and attend to the needs of our citizens. We know that we will continue to be amazed by the residents of Sonoma County as we move forward. 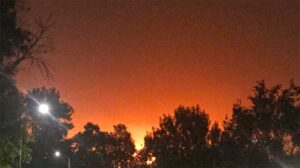 Many of you have asked how The Bird Rescue Center fared in the fires. Fortunately, ours is a story of bravery and hope. In the early morning hours of October 9th, our birds — the resident Raptor Ambassadors as well as the birds being treated in our Rehab Hospital — were all evacuated. As high winds howled and flames grew ever closer, the only people driving east on Chanate Road, toward the fire zone, were a handful of determined volunteers and Rehab staff, rushing in to save the birds in our care.

Our raptors were quickly boxed and loaded into cars in the smoky darkness, and then moved to a volunteer’s residence in Santa Rosa. It soon became clear that they needed to be still further away from danger, and shortly after dawn we had relocated them to another house further south in Cotati.

The birds being treated in our Rehab Hospital for eventual release were taken in by other wildlife organizations in the region. All the birds arrived safely and in good health. Given the circumstances, this in itself was quite a feat.

The next week was a whirlwind of activity. We moved our 18 raptors from evacuation boxes to plastic dog kennels to afford them a bit more room. They were rotated between handlers and perches we set up in the living room, kitchen, dining room and even outside (once air quality permitted) to spread their wings and preen. We prepared their food in the kitchen and made sure every bird got out daily for handling and cleaning. The birds were kept safe and calm, even as we humans nervously tracked the progress of several huge fires ravaging the North Bay. The situation was far from ideal, but with help we were able to pull off our very first emergency evacuation and sheltering. We even trained some friends and family members how to hold these special birds while we attended to their care and feeding.

We were relieved and grateful to learn that the Center had survived the fires intact. Everything required extensive cleaning and airing, but our WWII-era Quonset huts will continue to house our operations into the future. Our Raptor Ambassadors were repatriated on October 15, delivered by a small army of volunteers and friends.

BRC is currently a hive of activity as we finish cleaning and prepare to serve the community and our local wild birds again. The Rehab Hospital has reopened and is admitting rescued birds, including those suffering from smoke inhalation. 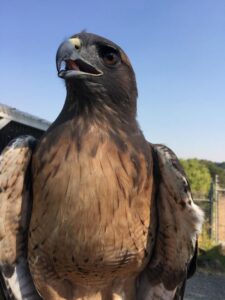 We invite you to come by the Center
October 21st and 28th, 10:00 am to 1:00 pm,
and meet these incredible birds and our dedicated volunteers.

Join us to celebrate the tenacity and fortitude of all who make Sonoma County home, and the beauty of our shared lands and wildlife. Our hearts go out to the members of our community who have lost their homes, including at least nine from our BRC family. Together we will return and rise up from the ashes, stronger and more resilient.