First of all: DO NOT FEED a bird, as this can cause actual harm, including breathing or digestive problems, and even death. Even if no immediate harm is done, feeding a bird can make it harder for us to diagnose what is wrong with it. Also, birds can possibly carry diseases or parasites, so be sure to wash hands and clothing after handling a bird.

What kind of birds will you take?

We see more than 130 different species of birds each year. We treat all NATIVE species of wild birds. In the case of non-natives, you can still call us for suggestions or referrals.

How do you pick up an injured bird?

Catching an injured bird is not usually a problem since the bird is often incapable of moving and is too weak or shocked to put up much resistance to handling.

Pick the bird up by grasping it gently around the shoulders so that the wings are held against the body and cannot flap. At this point the bird can be placed in a cardboard box with a soft towel on the bottom and a cover on the top. Be sure to have a box prepared in advance so that you minimize the time spent holding the bird.

If you are having trouble catching the bird, or you are afraid to touch it, a towel or sheet can be used. Simply drop the towel lightly over the bird. The darkness will help calm and slow the bird down so that it is easier to pick up.

If attempting to pick up a raptor (such as a hawk or owl) or large waterbird (heron or egret), always wear protective gloves and eye protection. Hold on to a raptor’s feet, or a waterbird’s head or neck when picking them up, as these are what can hurt you.

What can you feed a bird until you can get it to BRC?

It is best to give the bird NO FOOD OR WATER, but to immediately bring the bird to the Center. Never try to force water into a bird. If you do not know how to properly administer the liquid, you can send it down the trachea (tube leading to the air system) rather than the esophagus (tube leading to the digestive tract) and choke or kill the bird.

If a bird has been deprived of food for a long period of time, fluids and food must be reintroduced carefully so as not to cause further damage to the bird’s organs. This not something for untrained people to attempt.

DO NOT GIVE MILK OR BREAD TO BIRDS!  They are not mammals and therefore milk is not part of their natural diet. Milk may also cause diarrhea leading to dehydration, and bread does not provide the protein and vitamins needed by small babies. The Web is full of misinformation on what to feed birds. Bring them to us rather than trying to feed them yourself.

At the Center, baby birds are hand-fed a special diet tailored to the particular species. These diets have been developed over many years and are continuously adjusted and improved as we learn more about the nutritional requirements of various species.

How do you transport a bird?

Whenever possible, preparing your transport box before you attempt to pick up a bird minimizes handling time, which is less traumatic for both bird and rescuer.

The container:   Never use a wire cage to transport a bird, as cages can cause severe damage to feathers and wings. To carry and protect the bird during the trip to the Center, use a cardboard box lined with a soft towel. Cardboard causes less feather damage than a bag or similar container when transporting an excited bird that might be jumping around inside the container. Punch small holes in the box to allow for sufficient air but minimal light.

The padding:   Do not use shredded paper or cotton to line the box, as these can easily get caught in the bird’s toes or get wrapped around its neck. Do not use green grass cuttings, as the dampness could give the bird a chill. Finally, do not use an old bird’s nest.  These may harbor mites and vermin harmful to the bird. For younger or injured birds, a towel or facial tissue can be bunched around the bird to provide support and prevent it from resting in an uncomfortable, splayed position.

Now you can quickly pick up and box the bird. (See How do you pick up an injured bird? above.)

Once the bird is tucked safely in its box, a lid with holes punched in it or a towel can be placed over the box to prevent the bird from jumping out and to also give it some darkness. Frightened birds find darkness calming.

When transporting a raptor (bird of prey) or large waterbird, take care to ensure that the bird is securely contained in a box. It can be very dangerous if such a bird were to escape into the car as you were driving down the road.

If the young bird is hopping and running away from you, and it is in a “safe” location (i.e., no cats or dogs in the area and not near a road), leave it alone. If its parents are in the area they will probably find it, but continue monitoring the situation to be sure the adults return.

Found a fallen or destroyed nest

If the nest has fallen or has been destroyed, and you are sure that the parents are still in the immediate area, you can construct a makeshift nest using a small basket or plastic container.

Contact BRC for directions on how and when to bring the bird to us.
(See more in Baby Bird FAQs)

If the wind or other factor has knocked an egg out of its nest and you can locate the nest, gently place the egg back.

Please note that BRC is not licensed by Fish & Wildlife to incubate and hatch eggs, and that it is illegal to do so on your own.

If the bird is caught in something simple such as twine, string, or fishing line, have someone assist you by:

Bird caught in a building, skylight or chimney

If a bird is caught in a house or other building:

If bird is caught in skylight:

If a bird is caught in a chimney, contact BRC for additional instructions.

Oiled birds are rapidly debilitated either by the toxic effects of ingesting oil or other substances, or by resulting starvation and exhaustion when they are unable to fly and secure food. For the best hope of success, the bird must be stabilized before the substance is removed. Do not try to do this yourself.

Contact BRC for additional instructions, or how to locate us.

Injured bird (wing injury, flew into a window, hit by a car, etc.)

Bird caught by a cat or a dog

If you even suspect a bird has had contact with a cat, you need to bring it in! Puncture wounds may be hard to see, and the saliva of cats contains bacteria that can be lethal to birds. Time is of the essence here!

Always use extreme caution when handling birds of prey such as hawks and owls.

If you are at all unsure of how to approach these birds, contact BRC for additional instructions or to arrange for a Field Rescue volunteer to come.

Please note: All of our Field Rescuers are volunteers, with jobs and other responsibilities. While every effort is made to contact and dispatch Rescuers into the field in a timely manner, we cannot guarantee their availability.

Like raptors, much caution should be used when approaching these birds. They have very long, spear-like beaks on the end of a powerful neck that is equivalent to a coiled spring! These birds are attracted to shiny, reflective objects. Protect your eyes!

If you are at all unsure of how to approach these birds, contact BRC for additional instructions or to arrange for a Field Rescue volunteer to come.

Please note: All of our Field Rescuers are volunteers, with jobs and other responsibilities. While every effort is made to contact and dispatch Rescuers into the field in a timely manner, we cannot guarantee their availability.

Check out our other FAQs in this section. Still have questions?

Support our work — make a secure online donation with PayPal. Just click on the donate button and follow the easy steps. You will receive an electronic acknowledgment that can be used as a tax receipt. We and the birds thank you! 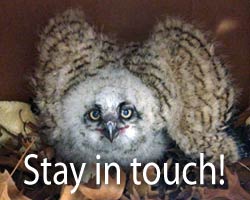