Your Bird Rescue
Always here …
For them, and for you!

Your Bird Rescue
Always here …
For them, and for you!

March 2020. I was, in a word, terrified. Lockdown had become official right before our busiest time of year—Baby Bird Season. Without our normal volunteer force, how would we manage? I feared for our patients. And I feared for our staff. I had no idea that what lay ahead would become both the most taxing and the most triumphant summer in memory.

“I don’t know a lot about birds, only that I love nature and wildlife. It was my first week in lockdown when, while standing at my kitchen window, I saw the baby bird in trouble.

I really needed someone who knew what to do. I dropped the bird off at The Bird Rescue Center and left. I never even knew if the bird made it until getting a call later. All I could think was, ‘Oh, my Lord, somebody actually took care of that little bird and it lived!’ It made me realize I can make a difference; it gave me a sense of value.” 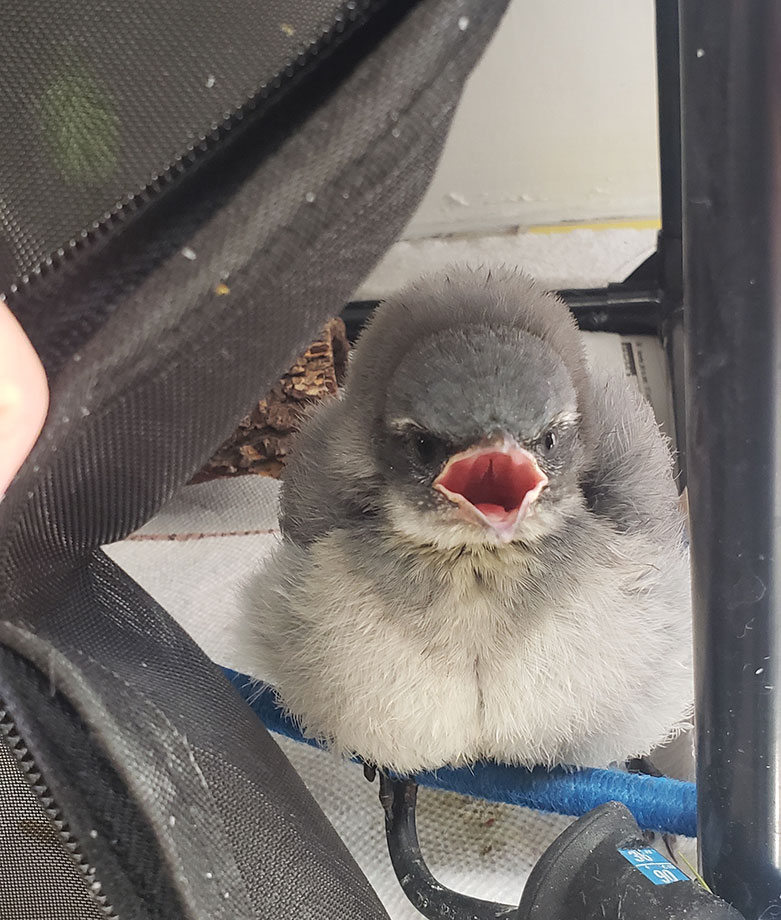 We were less than two weeks into Baby Bird Season and already 70 birds filled our wards when a tiny, orphaned California Scrub Jay arrived. His left-wing had been nearly amputated after being attacked, first by a free-roaming cat and then by a crow. He sustained multiple injuries including a wing fracture and a deep laceration under his left shoulder that extended all the way to the bone exposing the shoulder joint and severing skin, muscles and tendons.

We cleaned and dressed the wounds, stabilized the wing, and started a myriad of medications to mitigate pain, reduce inflammation, and prevent infection. While we were far from certain the bird would ever regain full function of his wing, in light of what was happening in the world around us, his will to live struck a deep chord and we knew we had to try. Dr. Rupiper performed surgery, skillfully reconnecting the severed tendon that was no larger than a strand of floss, both layers of muscles, and the torn skin. Now, he had a chance!

With healing underway, we moved the orphan to join a nest of baby California Scrub-Jays also in our care. This gave him a new family. As they all got older, we were able to slowly increase the time between feedings and encourage self-feeding. Dr. Rupiper visited weekly for check-ups and we maintained a strict regimen of daily monitoring and medications.

Finally, the moment of truth arrived. It was time to remove the sutures and see how well our patient had healed. The left-wing was weak, but it was functional! Now came the next hurdle—physical therapy (PT).

By this time the little group of Jays were eating on their own. We moved them to an outside aviary and started our little survivor on PT, transitioning quickly from twice daily manual manipulations to full flight conditioning. After a couple more weeks, our once broken baby Jay was flying perfectly! Bright and early one April morning, two of our Clinic Supervisors packed up all the Jays for release. It was truly a magical moment to watch this miracle bird going back into the wild. Against all the odds, he was alive and thriving.

Flash forward to early December, past the wildfires, yet another evacuation, a country still in pandemic chaos, and past the more than one thousand birds we had rehabilitated since the day the Scrub-Jay left us, to the arrival of an adult female Nuttall’s Woodpecker. She, too, had been caught by a free-roaming cat and had no use of her right wing. Her entire right side was caked in blood. But injuries notwithstanding, this girl was fiery! We began to delicately investigate the extent of her injuries discovering a keel fracture along her chest and a severe puncture into her right ‘wingpit’. The cat had pierced the skin, exposing the entire side of her right shoulder blade, puncturing through multiple ribs and muscles. It extended deep into her chest cavity and there were already signs of dying tissue and infection, which translated into a high risk of fatality. There was no question that if she were to survive, this puncture needed prompt treatment. We cleaned and dressed the wound, stabilized the wing, and started our little firecracker on medications to mitigate pain, reduce inflammation, and fight against further infections. Later, as Dr. Rupiper began treating the injuries, he suddenly froze and softly asked our Hospital Manager, Katie, who was assisting, to look closely. What she saw was incredible. The puncture had extended all the way into the chest, leaving the woodpecker’s rapidly beating heart completely exposed but miraculously stopping just short of the life-giving organ!

We watched in wonder at both this small bird’s incredible desire for life and this large man’s delicate touch as he expertly closed the wounds, giving her a fighting chance at survival.

On December 24th, our woodpecker’s wounds were healed enough to remove her stitches and start some light physical therapy. After increasingly more intense PT, we moved her to a flight aviary. While she could fly, her right shoulder had not regained full range of motion, nor did she have the stamina required for release. We continued with the more intense daily conditioning while moving her into progressively larger aviaries until finally, this small, feisty survivor was officially ready for her second chance in the wild. Early in January, we returned her to the wildlands of Sonoma County. In that moment, every hardship of 2020 faded, every fear washed away, and I was left with a deep-seated conviction that no matter what came next, together we would overcome it.

I have always been amazed by the BRC “flock”—our dedicated staff, genuinely heroic volunteers, and you, our devoted supporters. Despite my fears, we managed to treat our typical volume of 3,000 birds and even maintained our success rate of over 80%. I cannot put into words the pride I feel looking back at 2020 and seeing everything we accomplished together.

“I didn’t know how to take care of a bird, so I was happy when I saw that there actually was a Bird Rescue Center!

I’m glad that sweet little bird got to your care.” 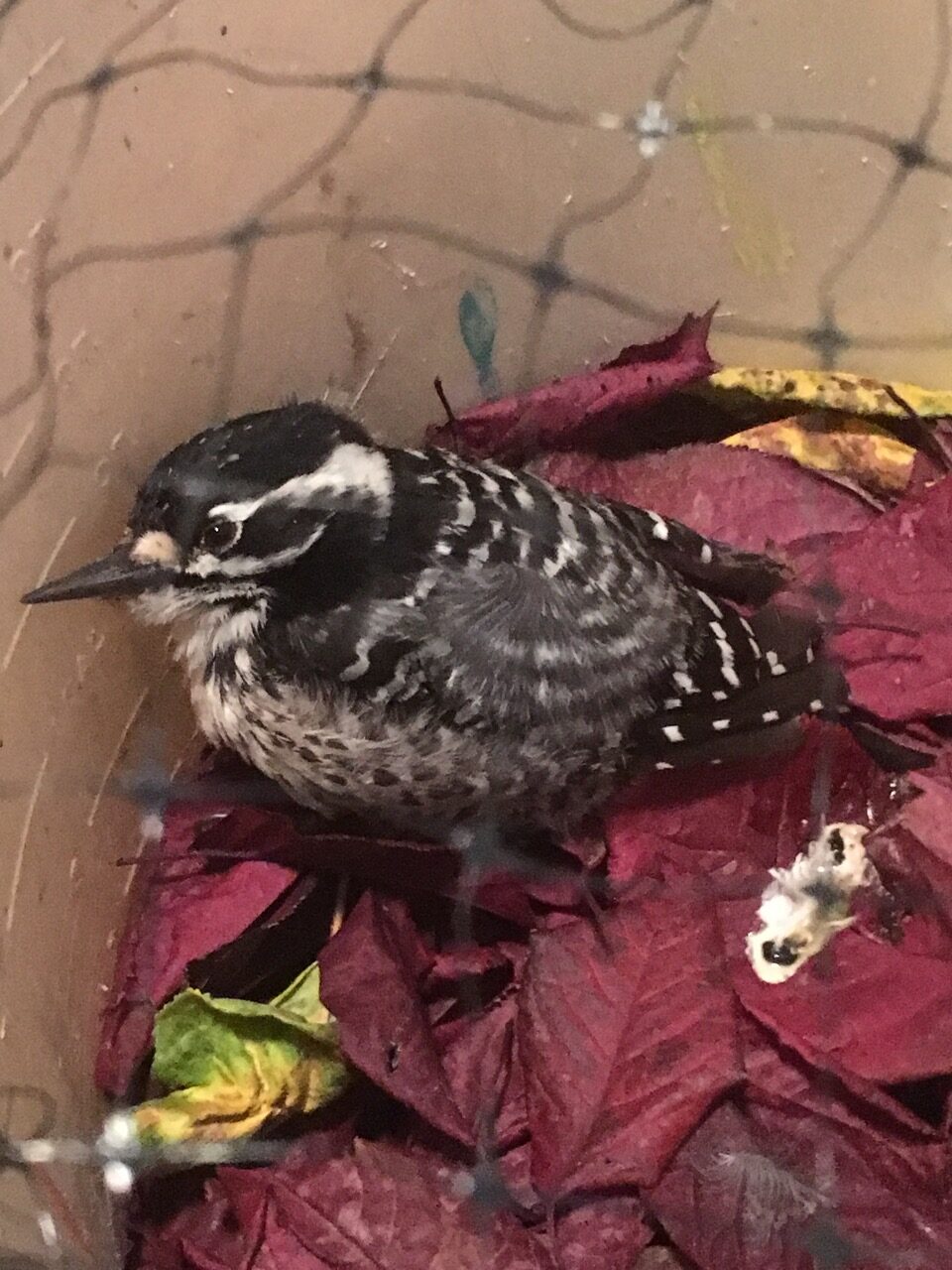 It’s impossible to attach a monetary value to miracles like this. Yet there is a cost to keeping our hospital running. The alternative is that thousands of birds each year would not get that second chance. Your unwavering support makes this work possible. Your gifts save lives.

Baby Bird Season will cost $200,000 before the summer is over. Please give as generously as you can to continue the work that results in miracles just like these.

Your Bird Rescue is always here … for them, and for you.

With all my heart,